When Kinder Morgan first introduced a proposal to threefold expand the Trans Mountain pipeline in 2013, few would have predicted that the review process itself would be as controversial as the actual proposal.

Jump ahead to today. Two years into the review, and the cost has increased, oil markets are in a prolonged slump, opposition to the project grows, and new governments in Ottawa and Edmonton have taken the reins of energy policy. All this, framed by uncertainty around how Canada’s oil sands and LNG development plans will square with our newly minted commitments signed in Paris at the COP21.

The new Liberal government has promised to revamp the National Energy Board (NEB) process, and in this promise CRED sees opportunity for real change. In fact, meaningful change seems so close, and the impacts so significant, that we see it as imperative that the process not just be tweaked at some undefined moment in the future. CRED and our members want the current process halted, and a new process built starting now. If we as a nation are going to contemplate an overall energy strategy in accordance with our international commitments, let’s do that NOW, while there are projects under review that could significantly hamstring or even compromise our ability to meet those commitments. Let’s do it so we can have a fair and transparent review of the Trans Mountain expansion, a project that could impact our province for years to come.

Let’s not forget that the current process is the same one that prompted two environmental organizations and over 35 individuals to publicly withdraw from the hearings. Economist Robyn Allan called the process “rigged” when she pulled out in May. There is also legal action against the NEB: the Tsleil-Waututh Nation has asked the Federal Court of Appeal to stop the review due to flaws in the process itself, and legal errors made by the NEB. Landowners, business people, academics and environmental advocates launched a constitutional challenge against the NEB on the basis that it unfairly restricts public participation and refuses to hear concerns related to climate change or oil sands development.

CRED was one of 100 signatories to a letter to Prime Minister Trudeau, asking for a halt to the Trans Mountain expansion pipeline review prior to the historic Paris meetings. The government has stated that the two pipelines currently under review – the TMP and Energy East – will continue in a transitional review process, but it remains unclear what changes will be made, and when.

CRED wants to ensure that the federal government implements changes immediately to ensure that these pipelines are subject to a proper climate review, including both upstream and downstream impacts, and particularly taking into consideration the potential economic impacts to BC businesses.

We are crafting an open letter to Prime Minister Trudeau and his Cabinet to revise the NEB process now, so that the Trans Mountain expansion project will be reviewed under the new process. Look for our letter to be circulated; we value your thoughts and support.

It’s been a whirlwind couple of weeks up on Burnaby Mountain. In a high-stakes stand-off late last month, hundreds of protestors clashed daily with Kinder Morgan surveyors over the company’s right to test drill in a city park. The Burnaby RCMP arrested over 100 grandmothers, First Nations leaders, Clayoquot Sound veterans and other local residents for stepping over what turned out to be a fictitious line (somebody needs to check their darn GPS), and local politicians in Burnaby declared war on the proposed expansion of the Trans Mountain oil pipeline.

Now that Kinder Morgan surveyors have packed up their machinery and the hubbub has died down, it’s time to step back and look at the bigger picture. What, exactly, would this pipeline bring us that is worth all the controversy and conflict? As British Columbians, what are we really getting out of the project?

Earlier this month, a report from economists at the SFU Centre for Public Policy Research and the Goodman Group found that Kinder Morgan had over-estimated the number of jobs created by the project by threefold. This means that during the project’s construction, at most 4,000 short-term jobs would be created.

Compare this to the tens of thousands of jobs in tourism, retail and other marine-based sectors that would be impacted if there was a major oil spill in Burrard Inlet, and the project starts to feel like a real risk for our local economy. The same report also found that only 2 per cent of the project’s benefits would flow to BC, whereas tar sands operators would retain a whopping 68 per cent of revenues. The rest of the revenues would flow to Alberta and other provinces.

CRED’s own research has found that tax benefits would also be tiny. Burnaby, the municipality that stands to benefit the most, would be able to fund at most 1/12th of its parks and recreation budget from additional tax benefits. And that’s assuming no repeats of the 2007 spill on Inlet Drive, since a mishap like that could immediately wipe out all the municipal gains. 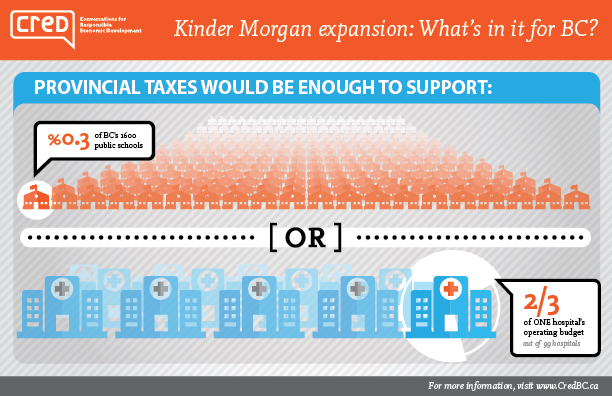 Provincially, the amount of benefit Kinder Morgan claims this project would bring would fund, at most, two-thirds of the running costs of just one of BC’s 99 hospitals. Now, that’s hardly a nation-building project. You can bet that Kinder Morgan’s announcement in late November that the company has quietly sold all its assets to its American counterpart certainly won’t increase the benefits to British Columbians, either.

A recent report came out claiming that there are now more Canadian jobs in clean energy than in the oil sands. Our own research has found that there are more jobs in the brewing and beer economy than in the whole of the oil sands. So why it is assumed that finding export markets for oil is a national priority but building clean energy jobs and, more importantly (sorry solar panels but a nice microbrew beats you any day), beer jobs isn’t?

Maybe what we really need is a beer pipeline. 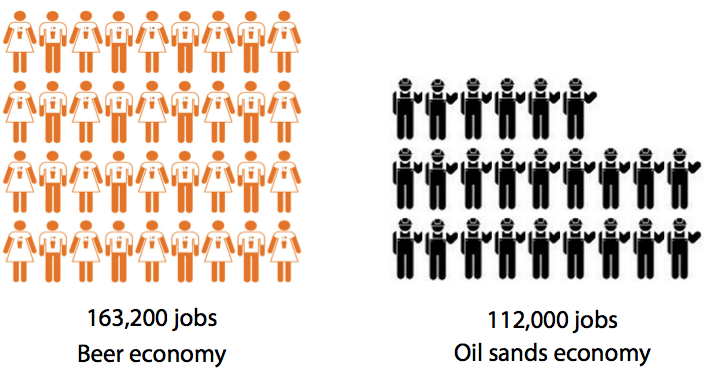 Earlier this week, an independent study released by the SFU Centre for Public Policy Research, in collaboration with California-based consultancy the Goodman Group, found that Kinder Morgan has substantively over-stated the benefits of its proposed Trans Mountain Pipeline Expansion in its submission to the National Energy Board.

The report echoes past research from CRED which has found that BC’s provincial and municipal coffers will only get a tiny benefit from the Trans Mountain expansion. Instead, oil sands producers, Alberta and, of course, Kinder Morgan will be the main beneficiaries. 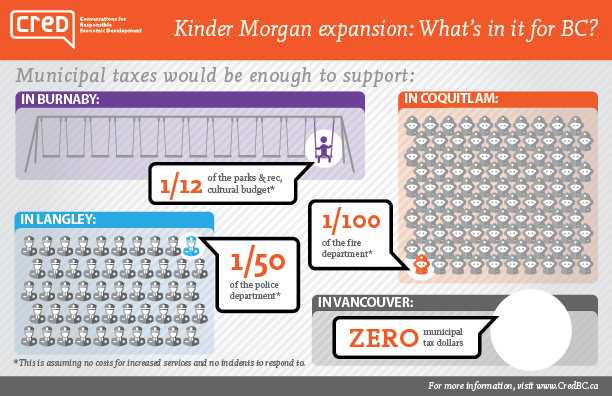 According to our research, Kinder Morgan’s stated tax benefits (which, as this report highlights, maybe also be overblown) would only fund a small fraction of provincial and municipal services – 0.3% of the costs of running the province’s schools, for example, or just 1% of the Coquitlam police department. Even the biggest municipal beneficiary, the City of Burnaby, could fund less than 9% of its Parks, Recreation and Cultural budget with tax revenues from the Trans Mountain Expansion. And this is a best case scenario, assuming no increased costs for servicing the pipeline right-of-way or any incidents to respond to.

BC provincial benefits from the Trans Mountain expansion

The SFU report also found that Kinder Morgan has significantly over-estimated the number of jobs the pipeline would create, and downplayed the cost of a major oil spill because the company failed to take into account the high population density of the Lower Mainland, underestimating the costs of a catastrophic oil spill by potentially billions of dollars. 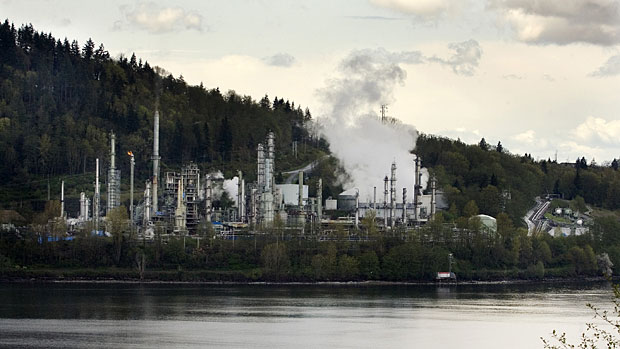 The Chevron refinery in Burnaby supplies about a third of the Lower Mainland’s gasoline and almost half of the Vancouver International Airport’s jet fuel. Most of the crude oil that it refines is received via the existing Kinder Morgan Trans Mountain pipeline; however, around 6,500 barrels currently arrive by rail each day and another 1,000 barrels per day (of 55,000 barrels per day total refining capacity) arrive via tanker truck.

The refinery would prefer to receive their crude oil entirely by pipeline, but in recent years they haven’t been able to secure enough space on the Trans Mountain pipeline. Using a rationing (apportionment) system, Kinder Morgan allocates shares of pipeline space out to different customers, including onto tankers for export.

Over the past few years, the percentage of pipeline apportionment given to the refinery has steadily declined in the face of increasing demand for oil for export. Chevron representatives have stated that non-pipeline forms of transportation make up the current shortfall but they come at an “extraordinary expense”.

In 2012, Chevron applied to the National Energy Board (NEB) for preferential shipping space on the Trans Mountain pipeline. Last week, they were denied this application by the NEB, who stated that priority apportionment should only happen in extraordinary circumstances, and noted that Chevron needs to investigate other options, such as receiving crude oil via tanker into the Burnaby Westridge terminal, before resorting to priority destination designation.

How does this relate to the proposed new Trans Mountain pipeline?

There isn’t a direct relationship, since the new pipeline would be designed to transport diluted bitumen products, which the Chevron refinery is unable to process. However, the current situation might be an indication that export demand will increasingly trump local gasoline security.

How will the decision impact BC residents?

This decision might not have a noticeable impact on people living and working in BC. However, there is a risk that gasoline prices will increase at the pump if the Chevron refinery has to continue to rely on costly methods of importing crude oil. There’s also a chance that the Chevron refinery could be forced to close down if unable to secure a sufficient long-term supply of crude oil, leaving the Lower Mainland and Metro Vancouver reliant on gasoline imports.

This blog used quotes and information from several news articles, including the Burnaby Leader, Reuters and CBC news.

More background and information can be found in our recent report “Assessing the risks of Kinder Morgan’s proposed new Trans Mountain pipeline”. 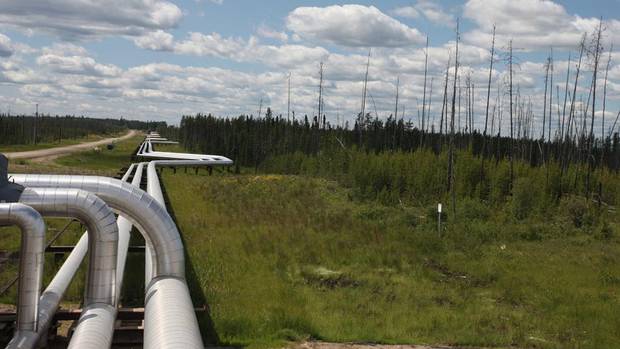 Kinder Morgan’s new pipeline isn’t the only proposal on the table in Canada. Today’s article in the Globe and Mail highlights the six main pipelines under review or planned for the future. Here’s what they say about Trans Mountain:

State of play: Kinder Morgan is mid-way through an application asking the National Energy Board to approve commercial tolls for the project. A formal application seeking authority to build the expansion is expected later this year.

Decision expected: Depending on when Kinder Morgan applies, the regulatory review could be completed by 2015, with construction starting in 2016 and operations commencing in 2017.

Opposition: Local forces have begun to marshal against the project, including some first nations and the mayors of Burnaby and Vancouver. British Columbia’s provincial leaders – Premier Christy Clark and Adrian Dix, the NDP Leader expected to gain power this year – have not yet made public their thoughts on the expansion.

Pipe dream: TransMountain hopes its route to approval will be less contentious than the Gateway brouhaha, but the line ends at the waterfront near Vancouver and there is much local opposition to the increased tanker traffic it would bring. 50-50, at best. 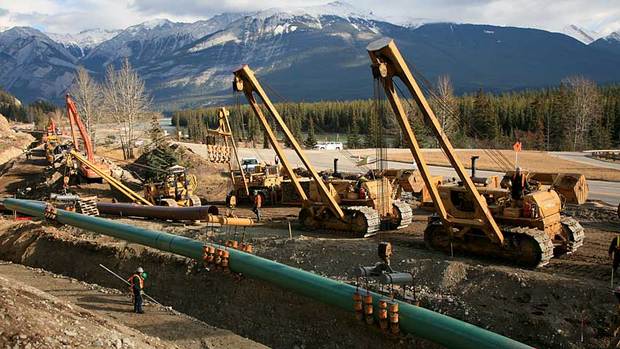