Much of the recent debate around Kinder Morgan’s pipeline and tanker project has centered around vigorous debate between the provinces of BC and Alberta and the question or whether the project is in the national interest. Ultimately, this depends on what kind of economy Canadians want to invest in, and what kind of economic future we want to create.

There are also important questions about whether Canada’s economy is reliant on oil sands expansion, and whether the pipeline would create long-term jobs. Because of these key questions, we are updating and re-sharing some of our previous research around what’s fuelling Canada’s economy and where Kinder Morgan’s pipeline fits in.

At the same time, over 700 businesses have joined together to raise concerns about investing taxpayer dollars in Kinder Morgan’s risky pipeline and tanker project at http://LetsMoveForward.ca

Where Does Canada’s Wealth Come From?

A diverse mosaic of industries forms our national economy, from tech start ups to winter sports to microbreweries. Although key industries vary significantly across regions, some clear national trends are also evident.

Real estate is by far Canada’s largest sector overall, contributing a full 13% of national GDP. Manufacturing and retail and wholesale trade are also significant, each bringing in some 11% of GDP (according to 2017 data by StatsCan). Construction and finance each generate another 7% of GDP.

Comparatively, in 2017, the oil and gas extraction sector was responsible for 6.5% of national GDP (again according to StatsCan). Although still significant, this economic contribution is less than most Canadians realize, as reported in a poll conducted by Environics. 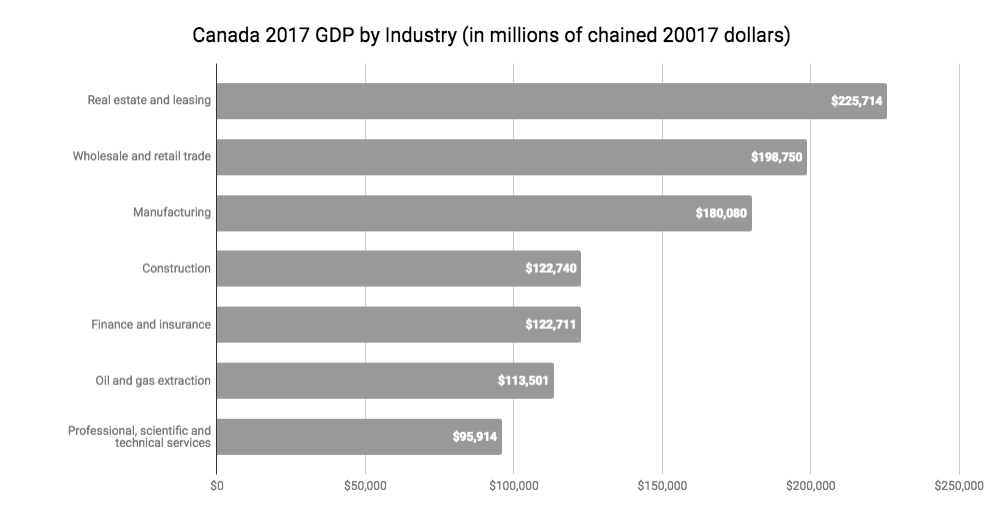 Of this, the Alberta oil sands (what Statistics Canada calls “unconventional oil and gas extraction”) contributed just 2% of GDP – a number that has remained relatively consistent over the past several years. 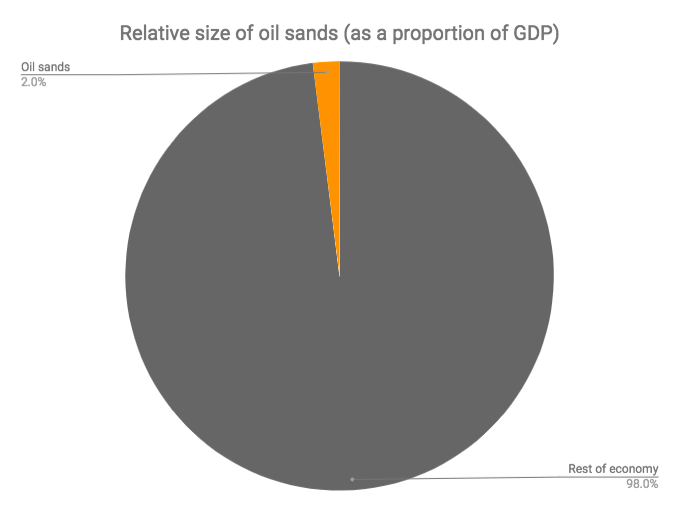 Which Sectors Contribute the Most to Social Spending?

Another part of the ‘national interest’ conversation has focused on whether Kinder Morgan’s pipeline is necessary to pay for other public investments, like schools and hospitals. To answer this question, first it’s important to put the energy sector in context.

In 2014, the total the oil and gas sector––including oil and gas extraction and support activities––contributed 3.6% of all federal corporate tax revenue. This number is relatively low compared to financial and insurance services, which together contributed 23% of all federal corporate taxes, and construction, which contributed 7.6%. It is also notably lower than the manufacturing sector, which covered 14% of federal tax revenues in 2014. 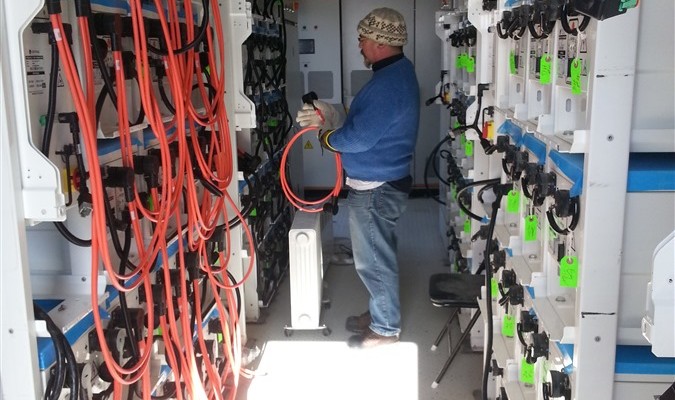 A new report has been released showing that Canadian jobs in clean tech now surpass those in the oil sands. According to the report from Clean Energy Canada 23,700 people work in green energy organizations compared to 22,340 who are directly employed in the oil sands.

So who is creating these jobs locally? We’ve gone behind the numbers to profile a few companies that are doing just that.

Clean Tech Companies in BC

Premier Lighting: a Burnaby based company that manufactures energy efficient commercial lighting fixtures, many of which are LEED compatible. It recently installed patented lighting in the Vancouver Public Library’s main branch parkade.The integrated system uses motion sensors to guide vehicles to vacant stalls, while the LED lights turn on only when the sensors detect vehicles or pedestrians.The lights are powered about 75% of the time, and BC Hydro estimated the project would reduce the library’s energy costs by about $31,000 a year.

Corvus Energy: this Richmond-based company designs and manufactures high power lithium ion energy storage systems for use in heavy industrial applications throughout the world. Corvus Energy was created in 2009 and named one of Canada’s companies to watch in the 2014 Deloitte Technology Fast 50 Awards.

Solegear Bioplastics: founded in 2006 in Vancouver, this company produces and distributes high-performance plant-based plastics, such as bioplastic pellets, sheets, and finished goods for rigid packaging and durable products. Solegear received $1.6 million in funding from the federal government this past summer and has won awards from the Globe Foundation (Best emerging technology 2014) and City of Vancouver (leading business innovator).

Endurance Wind Power: based in Surrey, it manufactures and sells turbines for homeowners, businesses, and institutions around the world. It opened a new manufacturing plant in the West Midlands, one that is expected to become a centre for international exports and produce 100 farm turbines a year.

dPoint Technologies: this company began in 2005 and licensed the patents, designs and manufacturing equipment for low cost membrane humidifier technology from leading fuel cell manufacturer, Ballard Power Systems. Today, it carries out R&D, manufacturing and selling of membranes and heat and humidity exchangers for energy recovery in buildings, worldwide. DPoint has over 20 of the leading HVAC companies in North America, Europe, China and India including Honeywell, Daikin and Goodman as clients.  The top 3 residential energy recovery companies in Europe are using DPoint membranes.

Powertech Labs: a subsidiary of BC Hydro that specializes in clean energy consulting, independent testing and power system solutions. It operates the only hydrogen refuelling station in the lower mainland that is capable of filling 700 bar (which is considered a full tank). Powertech also tracks over 350 of BC’s 550 public electric charging stations.

What is needed to support this sector?

The Clean Energy Canada report estimates 24 billion has been invested in clean energy since 2009, with the majority of provincial investments going to solar and wind power in Ontario and Quebec, and hydro power in BC. There are also significant investments coming from private sector financiers abroad. However a common sentiment is that there needs to be more support from the federal government to push the clean tech sector into maturity.

Grant Brown, global marketing vice-president for Corvus, said clean-tech companies in BC have, by and large, created their own success with little help from governments, apart from the trade commissioners who facilitate introductions abroad.

Endurance Wind Power has focused its business in the UK due to high-energy prices and financial incentives to encourage Britons to generate their own power and sell any excess back to the grid. In an interview, Randeep Dosanjh, Endurance’s marketing specialist, said because B.C. doesn’t have such “feed-in” tariffs, or comparable energy prices, Endurance sees little local potential. The Clean Energy Canada report also prescribes more federal support of the industry, and Merran Smith, Director of Clean Energy Canada notes that currently subsidies and taxes are heavily entrenched in favour of oil and gas, and eat up a good deal of the country’s diplomatic relations efforts.

Clean tech is clearly a strong job creator, with huge potential right here in BC, but is it enough to spark a change in national regulation? While there is some infrastructure, we are nowhere near Germany’s goals for renewable energy to make up 40 to 45% of the share in gross electricity consumption by 2025. Perhaps we could start with an energy policy, and make strides from there.

Should Canada adopt the same energy model that made Norwegian citizens theoretical millionaires? 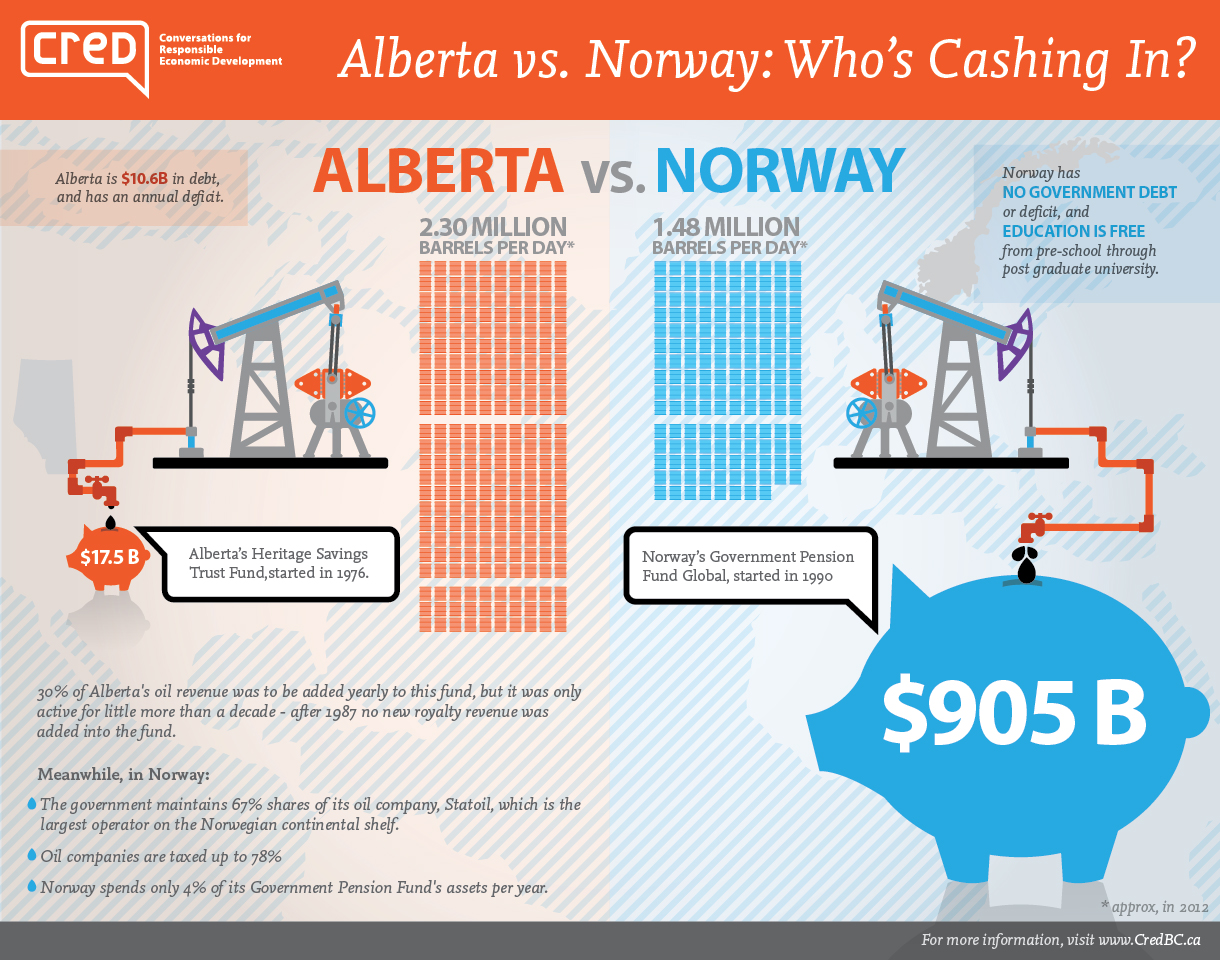 What is Norway’s energy model?

To understand Norway’s energy model, it’s helpful to go back to 1962, when excitement ignited about the possibility of oil in the Norwegian Continental Shelf (NCS). A year later, Norway claimed sovereignty over the NCS and deemed any natural resource found there the property of the government. This initial government response forms the basis of the very different philosophies between Norway and Canada on natural resource ownership. While Norway claims ownership over oil in its land, Canada assumes that any oil in the ground belongs to the companies that extract it.

The disparate philosophies of the role of government in the oil industry seem to be at the crux of Norway and Canada’s very different paths in the industry. In 1972 the Norwegian government established its own oil company, Statoil, which was awarded 50% of all petroleum production licenses. (Currently the government owns 67% of Statoil, and the other 33% is public ownership.)